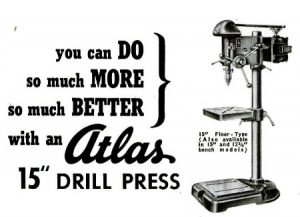 The Atlas Press manufactured a wide variety of stationary metalworking tools. Gardner T Eames began manufacturing hubs and spokes in 1868. Wooden split pullies were added in 1887 and he formed the Eames Pulley Company in Kalamazoo in 1889. This was a short-lived venture. Another company was formed in 1894 by Wilfred, F V, and Gardner Eames. They manufactured a twist drill grinder.
Eames Presses was established in 1911. Products were an arbor press and drill grinder. Partner Herbert H Everard died in 1913 leaving his share to his daughter and son-in-law John H Penniman. When the business began to fail, Eames sold out to Penniman who moved the business and renamed it the Atlas Press Company. Eames remained at the old site and revived the Eames Press Company in 1916. Conflict arose and ended with a mixed court decision. Eames moved to Evansville, Indiana in 1919 and established the Evansville Arbor Press Company. This lasted until 1923.
Penniman was able to make a success of his company. Wood lathes, metal lathes, drill presses, and a table saw were added. A relationship was established with Power King. Both companies made machines for each other as well as for Sears. Atlas bought Power King in 1947 and Clausing in 1950. Atlas took the Clausing name in 1965 and is still in business today.
Return to Home Page