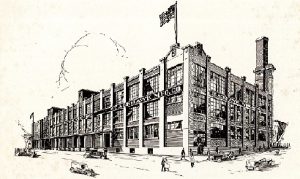 Blackhawk Manufacturing was a subsidiary of the American Grinder Corporation established to manufacture and market automotive tools. American Grinder was incorporated in Milwaukee, Wisconsin in 1901. Initial capitalization was only $5,000 but the company had the backing of C A Krause of Charles Krause Milling Products. Items included several hand-crank grinders in four levels of quality from the little “Buddy” to the premium “Liberty”. They began making water and oil pumps for the military in 1914 and continued making water pumps after the war. 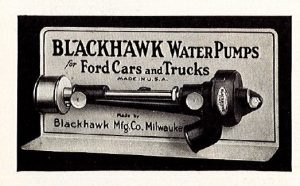 C N & F W Jonas became affiliated with American Grinder between 1918 and 1919. The Jonas brothers had been in charge of marketing for Walden-Worcester and knew the automotive tools market. The brothers convinced Grinder to enter the tool market using their knowledge of Walden’s latest work. This resulted in a copyright suit brought by Walden charging the Blackhawk logo with Indian chief was too similar to their Tomahawk logo. The Court of Appeals determined the Blackhawk logo was likely to create confusion between the two brands and that American Grinder had intended to benefit from the similarity. The logo was dropped but they retained their name.

American Grinder reorganized in 1920 to provide needed capital for expansion of their wrench business. George Adam and Fred Mayer entered the company at this time. Then, Herbert Brumber became majority stakeholder in 1924. When it became apparent that the Blackhawk name was significantly more valuable than American Grinder, the Blackhawk name was adopted in 1925. The company acquired the Hydraulic Tool Company in 1927. It was during this period that Blackhawk partnered with Armstrong and had nothing to do with Chief Black Hawk at Fort Armstrong although “Chief and “Scout” were brand names. 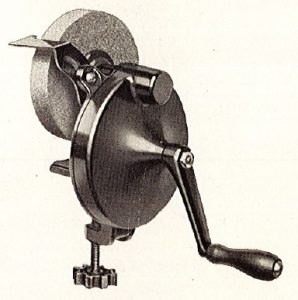 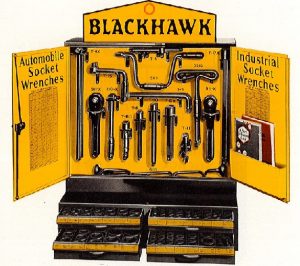