The Davis Bournonville Company was known for oxyacetylene welding and cutting equipment. Augustine Davis and Eugene Bournonville were both interested in acetylene production. Augustine was associated with the Carbolite Construction Company in Chicago. He moved to Elkhart, Indiana in 1902 were he established the Davis Acetylene Company. The primary product was a lighting generator. This was the gas lighting period when houses often had an acetylene generator in the basement. Train lighting was also important.
Eugene became interested in gas welding and cutting about 1901. He traveled to Paris where he studied independent pressure systems. The two men met in Paris. Later, on another trip to Paris, the two traveled together. The men decided to begin a joint venture during the trip. This was the Davis Bournonville Development Company. They continued with their individual interests for a while longer.
Steel was cut with a hammer and chisel before the oxyacetylene torch. In a demonstration of their torch, they cut a 3-inch-thick piece of steel at 6 inches per minute. This was the equivalent of doing 12 man-hours work in 3 minutes. They had developed the Oxygraph by 1911. This machine could cut steel in irregular shapes.
A complete merger of the companies was completed in 1917. There were now plants in Ontario, Elkhart, and Jersey City. The Air Reduction Company ( AIRCO) bought the assets of DB in 1922. Products were marketed as Airco-Davis-Bournonville for a while. 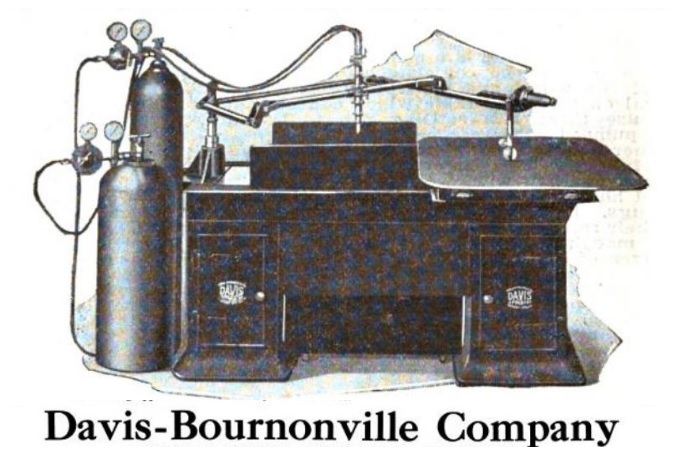