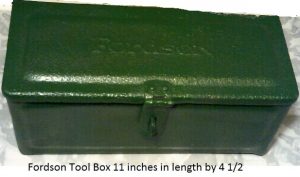 Henry Ford began experimenting with tractors made from automobile parts with the Automobile Plow in 1907 and ending in 1915 with the Model B. The B was used in a plowing demonstration but was never manufactured. In 1916, Ford designed a dedicated tractor with patented unit-frame construction. The newly designed tractor went into production in 1917 with full support of the Ford Motor Company name, manufacturing ability, and dealer network.  All 1917 models were shipped to Europe to aid the war effort.  A private company, Henry Ford & Son was incorporated midyear 1917 with the Fordson name first used on tractors in 1918. By 1925, Ford had sold 500,000 tractors and in 1928, production of Fordson tractors ends.