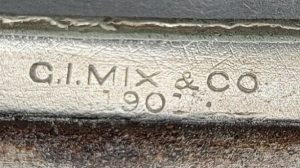 Gary Ives Mix learned pewter working from his father. He began working for himself about1845 in Yalesville, Connecticut. The main product was serving spoons and tea sets. Gary acquired several patents for machinery used in the pewter trade. Power was provided by a 150 hp waterwheel. Steam power was added in 1886. The company began making carpenter’s tools in 1889. Gary died in 1892. The company continued until 1903. There were a series of owners between 1903 and 1939 when the company was shuttered for good.