The Hartford Suspension Company manufactured shock absorbers, electric starters, and automotive jacks. In the first days of automobiles, several wagon companies tried mounting engines on their existing designs. Wagon springs oscillated at the higher speeds causing accidents. Edward V Hartford observed a dampening device used in a bicycle race while in France. He partnered with racer/designer J. Truffaut creating the Hartford Suspension Company in 1904. Leon The’ry drove a Richard Brasier automobile to victory in the Gordon Bennet Cup race that same year. The car was equipped with their shocks. Two years later the Hartford-Truffaut shock absorber was regular equipment on Pierce, Peugeot, Locomobile, Matheson, Studebaker, Aerocar, Brazier, Napier, Gobron-Brillie, and Rossell automobiles.
The company relocated from New York to Jersey City, New Jersey in 1908. The new location was next to the headquarters of the Great Atlantic and Pacific Tea Company. A & P was owned by his father. He developed an electric starter in 1910 using a small electric motor and gear reduction. The starter was soon used on airplanes. A variation of the starter served as a braking system for trains in 1911. Alfred Reeves, of United Motors, joined the company in 1912. Reeves provided an additional source of innovation. The company was soon making springs, rims, brakes, starters, lights, and lighters in addition to shocks.
The company name was changed in 1916 to Edward V Hartford incorporated. The new name was chosen because the company was now an accessory manufacturer. People also associated the company name with Hartford, Connecticut. Edward died in 1922 at the age of 52.
Return to Home Page 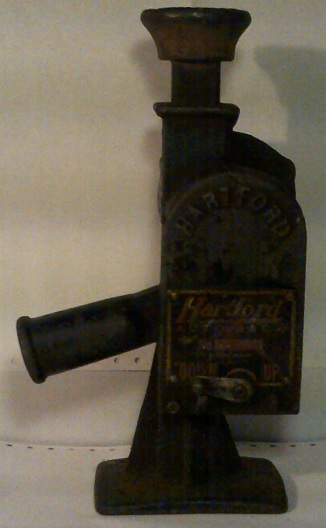