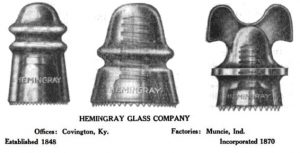 Hemingray was the world’s largest manufacturer of glass insulators. Ralph Gray and Robert Hemingray left Pittsburgh after the great fire of 1845. Their destination was Covington, Kentucky. They settled in Cincinnati, Ohio in 1848 when unable to find a facility in Covington. The partners acquired a Covington location four years later. Products manufactured by the Gray & Hemingray Glass Works included apothecary jars, bottles, and Globe fruit jars.

Ralph Gray died in 1863. The Hemingray family and friends acquired full control of the company. Robert then died in 1866. Still in the family, the Hemingray Glass Company incorporated in 1870.Their primary product became telegraph insulators.

Coal was their energy source in Covington. Seasonal flooding and drought made transportation via the Ohio River unpredictable. The company was dependent on barges for coal and sand. The Indiana gas belt offered cheap and abundant energy. They opened a plant in Muncie in 1888. An effort was made to reopen Covington after the gas ran out about 1900. The effort failed and they remained in Muncie. Hemingray was acquired by Owens in 1933 via a stock swap.