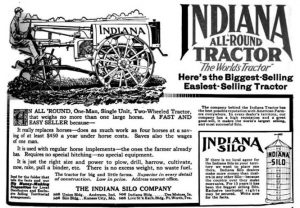 The Indiana Silo Company, located in Anderson, Indiana, was the most successful silo manufacturer in the United States. They purchased the fledgling Star Tractor Company of Findlay, Ohio in 1919. Star was established in 1917. Expectations were to make 5,000 units per year selling at $1,000 each. Attachments were also manufactured.

The Tractor War was well underway by 1922. Horses were conscripted for the war effort and most died. Young men fighting overseas crippled the labor supply. Those who were fighting witnessed the value of tractors being used in the war effort. When they returned in 1917, tractor sales boomed. Then an agricultural recession hit. The number of tractor manufacturers fell from well over 100 in 1921 to around 10 in 1930. Fordson captured about ¾ of the market selling their tractor at 395 dollars. Ford openly admitted this was below cost and meant to capture the market. IH held field demonstrations to show their tractors were worth the extra cost. Their Titan was selling at $600 and Deere’s Waterloo Boy at $675. Indiana had dropped their price from about $1,000 to $665. They didn’t survive.