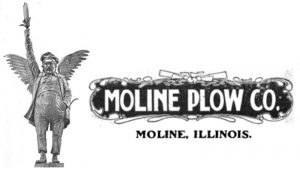 Henry W Candee and Robert K Swan worked for Alonzo Nourse manufacturing hay rakes in Moline, Illinois. Candee & Swan bought the business in 1854. The company began making plows in the 1860s setting up a fierce rivalry with John Deere. Winning a lawsuit allowed use of the “Moline” name for their plows.

George Stephens owned a sawmill 30 miles outside Moline on leased government land. The US Government purchased his property in 1864. He used proceeds from the sale to purchase an interest in Candee & Swan. Candee & Swan both sold their interest to Stillman W Wheelock. Wheelock and Stephens incorporated the Moline Plow Company in 1870.

The 3-wheeled Flying Dutchman plow was introduced in 1884. The new sulky design had a light draft that was much easier on horses. The Champion check-row corn planter was added in 1886. Profits from these popular implements allowed the company to expand. Expansion was done by purchasing existing companies with recognized brand names.
The Henney Buggy Company was added in 1902 followed by the Freeport Carriage Company. These two companies added a line of style and luxury. Farmers were flush with cash at this time and automobiles were not yet widely accepted. The T G Mandt Wagon Company of Stoughton, Wisconsin was acquired in 1906. Production was maintained at the Stoughton factory. Since the company did not have a grain drill in their lineup, the Monitor Drill Company of Minneapolis was added in 1909. The Acme Steel Company of Chicago was an important 1911 acquisition. This enabled a dependable supply of the appropriate steel for implements.

Adriance Platt was one of the most important additions. This hay equipment and harvester manufacturer was located in Poughkeepsie, New York and had been left out of the IH formation in 1902. Adriance Platt had been in business since 1850 and owned many important patents. This 1912 acquisition added the Buckeye harvester and an important Eastern manufacturing location. A plow factory was soon added to the location.

In 1915, Moline purchased the Universal Tractor Company of Columbus, Ohio for their patents. The two-wheeled tractor was produced in Moline beginning in 1916. Revisions were made each year until the Universal was discontinued in 1923. Long time gasoline engine maker Root and Vandervoort power products were added in 1921/1922. This company added additional gasoline engines for use in Moline products.

Willys-Overland purchased 51% of Moline in 1918. This was at the height of war related prosperity. Under Willys control, the company became the New Moline Plow Company in 1919. Willys increased ownership to 82% just as the post-war economy became unstable. Willys tried to restructure the company in 1922 but failed and lost control.
The Moline Plow Company was organized in 1922 and quickly reorganized again in 1923 as the Moline Implement Company. This was a time of acquisitions and divestures as the company adapted to a new era in agriculture. The Poughkeepsie, Stoughton, and Freeport properties were disposed of. Property swaps were made with IH as they concentrated on the Minneapolis and Moline locations. The company operated at a profitable but smaller concern until the 1929 depression.