Seth Peck – Began making tinsmith machines in Southington, Connecticut in 1797. Seth patented a machine for making tin-ware in 1819. This was the foundation for a series of companies. First was Seth Peck & Company, then O & N Peck, Peck, Smith & Company, and Peck – Smith Manufacturing Company in 1850.

Roswell Alcott Neal – Roswell learned clock-making in his father’s shop as a boy (Elisha Neal). He then formed a partnership with M W Atkins making steel yards that lasted until 1849. After that he began working for O & N Peck. He became president of Peck, Smith & Company in 1861 and president of PSW when formed in 1870. Neal retired in 1887. He also served as president of the Southington Cutlery Company, Aetna Nut Company, Aetna Match Company, and Southington National Bank.

Solomon Stow apprenticed as a cabinet maker in 1823. He then began clock-making in 1828. Solomon joined Seth Peck in 1837 as an employee. Solomon, his son Enos, and Hial Grannis began making tin-working tools in 1847. Orson joined in 1849 forming S Stow & Sons. The company furnished parts for the Seth Peck Company. A joint stock company was formed in 1852 becoming the S Stow Manufacturing Company. Stow merged with Roys & Wilcox and Peck, Smith to become Peck, Stow, & Wilcox in 1870. Enos Stow became president of PSW in 1887 until 1899.

Shubael Patterson and Benjamin Wilcox operated a mill spinning cotton yarn. The mill was afterward owned by Elishama Brandegee. The plant was converted to make tin working tools. A joint stock company owned the business for a while, and then Roys & Wilcox in 1845. The factory was destroyed by fire in 1846 and rebuilt.
Samuel C Wilcox was also a partner with Charles Blair. Their company made axes, chisels, rakes, and draw knives. This company assigned in 1856. 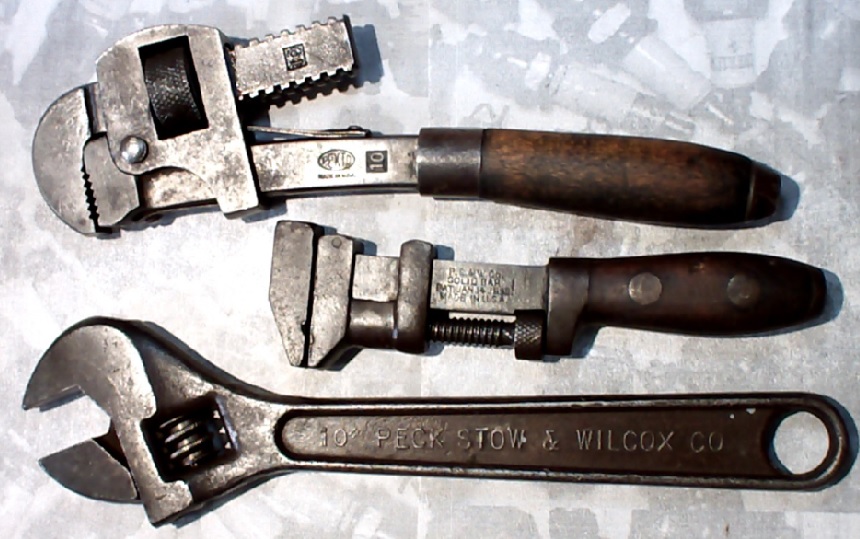