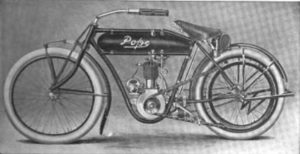 Albert Augustus Pope established his company in Boston in 1876. The first products were air pistols and cigarette rolling machines. Albert saw his first velocipede while attending the Philadelphia Exposition in 1876. He began importing Excelsior Duplex bicycles from England in 1877 to resell in the United States. This same year, he met with George Fairfield of the Weed Sewing Machine Company. Weed produced 92 Columbia bicycles the first year and 1,000 the second. Control of the Weed plant occurred in 1881. Albert was also making money buying patents and collecting royalties.

The Hartford Cycle Company was established in 1890. This was to manufacture lower price bicycles. The Columbian was selling for $125.00. The Hartford Rubber Works was acquired in 1892.

Pope ventured into the electric car market in 1896. They made 500 electric autos over the next two years. The Columbian Electric Automobile Company was acquired by the Electric Vehicle Company. Range and weight were problems for electric vehicles. Ford’s success was the end of the electric.

Motorized bicycles were made beginning in 1902. This evolved into the famous model L in 1914. The L was an advanced machine capable of 70mph. Production of the L ended in 1920.