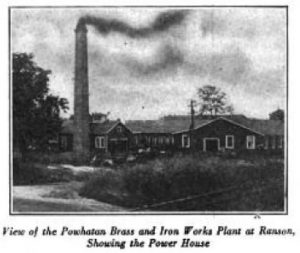 John Simmons worked for Hunter, Keller in New York for 25 years. This company made steam specialties. After expansion into Chicago left the company overextended, they closed in 1880. Simmons took advantage of the opportunity and immediately organized the John Simmons Company. The John Simmons Company was incorporated in 1891. John then organized the Powhatan Brass & Iron Works in Ranson, West Virginia in 1892. This company specialized in fire-fighting equipment. Brass fire nozzles are highly collectable.

Other interests included the Essex Foundry in Newark, New Jersey and the Simmons Pipe Bending Works. John’s three sons were involved in management of his companies.