The primary business of R Hoe is the manufacture of large cylinder printing machinery with saw mills and blades becoming important later in their history. The company operates as a custom machine shop, designing and building unique machinery in addition to their core business. Much of this work is done in secrecy to protect patents so few details are available. A great deal of the work brought to R Hoe is of great difficulty as well as experimental, only possible due to the exceptional skill of their workforce. The experimental nature of the custom work provides many significant advances and a few dismal failures such as a perpetual motion machine.

Until the 1840s, machine parts were hand fit with individual shops having their own system of measure. There was no standard for diameter or number of threads for screws between manufacturers. Joseph Whitworth of England is responsible for introducing industry standards and R Hoe was one of the first American shops to use Whitworth thread cutting machinery. Items from Whitworth included a lead screw to build a screw cutting lathe using Whitworth standards. Later, lathes, planers, and drills were purchased. Around 1850, American A M Freeland began producing better quality machinery and Hoe switched to Freeland’s machines.

Morgan Wing, John O’Day, and Frederick Robert began the Robert Wrench Company acquiring patent number 1,407,578 for their pipe wrench. Their wrench was marked “Robert Wrench” and pat. pending. Sales were handled by the Arnold Sales Corporation which marketed the wrench with the slogan “The wrench with the bulldog grip”. The wrench was also promoted by the Frank Kiernan advertising agency. The Robert wrench was available in 8, 12, and 18 inches. When Hoe began selling the wrench with their name the patent date Feb 21, 1922 was added. Available sizes for the Hoe wrench increased to 6, 8, 10, 14, 18, and 24 inches. The 6 inch wood handle has the same information as the larger steel wrench except marking is in the jaw rather than the handle. 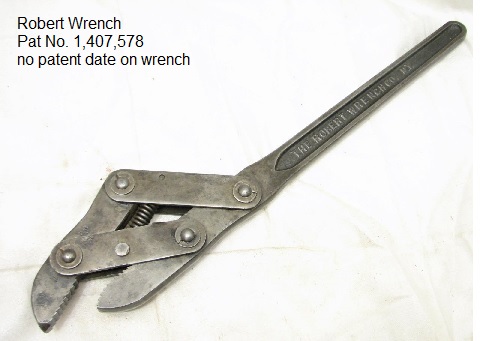