The Upson Nut Company manufactured boxwood rules, levels, cutlery, and threaded nuts. Dwight Langdon began manufacturing carriage bolts in Unionville, Connecticut in 1854. Andrew Upson was Dwight’s brother-in-law. In 1857, Andrew began selling what was then a novel product. Andrew Upson and George Dunham bought the business when Langdon died in 1860. The two partners joined forces with three others to form the Union Nut Company in 1864. Langdon sold out in 1865 and Upson sold his interest in 1866. Andrew formed the Cleveland Nut Company in 1872 and bought back the Union Nut Company in 1877. The name was changed back to the Upson Nut Company in 1883.
John Bunnell established a sizable turning shop in Unionville in 1864. When this company failed, the Meach & Hart Cutlery Company, successors to Pond & Hart, took over the first floor. The Standard Rule Company began operating on the second floor in 1872. Meach & Hart became Upson & Hart in 1880. The rule company continued under their own name for some time. The Upson name appeared on folding rules by 1891 and could have been earlier. The company was chartered in 1883.
Return to Home Page 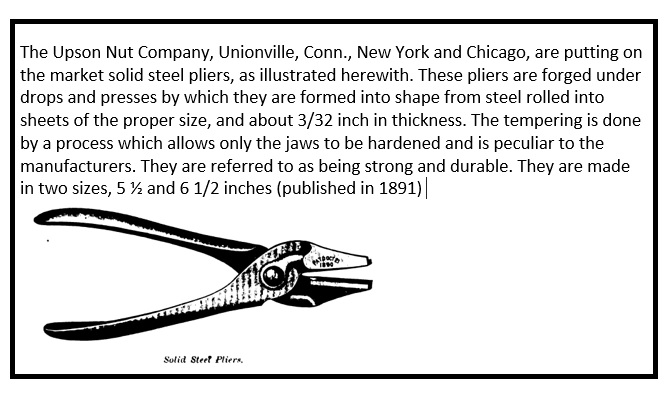