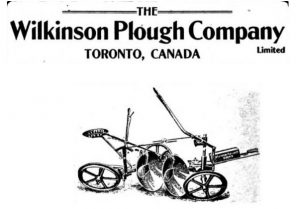 The G F Wilkinson & Company Aurora Plow Works was established in Ontario in 1868. The company moved to Toronto in 1890. Warsaw-Wilkinson was established in Warsaw, New York in 1901. This was an American branch of the company. Making agricultural implements in the United States saved the 45% tariff in place at the time.

Walkerville Wagon Works owner William McGregor died in 1903. Unable to finance production, the family sold the company but kept the building and land. The wagon business was moved to West Lorne in 1904. Wilkinson bought West Lorne in 1905 and sold it in 1911. Gordon McGregor convinced Henry Ford to manufacture automobiles in the old Walkerville plant. Enabled by 17 employees, Gordon drove the first Ford off the line in 1904. Ford was the first major car company in Canada with the advantage of avoiding a 25% tariff.

Wilkinson was in assignment in 1910. Bateman Manufacturing of Grenloch, New Jersey bought the company in 1912. Bateman made Iron Age garden cultivators. The Canadian plant made both company’s products. The Iron Age line was sold to A B Farquhar in 1930. Unable to find records of Bateman-Wilkinson after 1930.