In 1858, C W & W W Marsh used the word “Harvester” to describe a machine they had designed and built that ultimately created the great William Deering Company. Instead of dropping wheat out the back onto the ground, their machine had a deck with rakes that pushed the wheat to the side in bundles to be tied. Labor was half of that required by the reapers of the day. Feeling they were ready to market their machine, they built 12 harvesters in 1860. However, their harvesters didn’t stand up to field use due to poor construction. They built a second machine in Plano, Illinois in 1861. They tested this machine thoroughly until confident it was ready to market. The Marsh brothers partnered with Lewis & George Steward in 1864 to build 26 of their new machines. In field trials held in Dekalb, Illinois in that year, W W Marsh harvested an acre of wheat in 55 minutes working alone.
Easter & Gammon, of Chicago, obtained a license to manufacture and market Marsh harvesters in a 6-state area. Easter & Gammon dissolved in 1866 with the two splitting their market area. Gammon continued having harvesters built at Plano by Marsh Brothers while Easter chose Rockford, Illinois. William Deering joined with Gammon in 1870 forming Gammon, Deering, & Steward. The company expanded their area and gained control of Easter’s firm in 1877. Having accumulated a million-dollar fortune, Gammon left the partnership in 1879. This left Deering on his own with a landlocked plant and no railroad connection.
Deering moved to Chicago and built a new facility to manufacture harvesters equipped with the new Appleby twine binder. Steel fragments left in straw and grain by wire binding was a problem. An automatic machine that used twine and allowed a single operator put Deering a in a powerful position at just the right time. The 1800 season proved immensely successful using nearly all the fiber of the Philippines and Yucatan.
The William Deering Company incorporated in 1883, became the Deering Harvester Company in 1894, and merged with the McCormick Company in 1902 to form International Harvester.
Return to Home Page 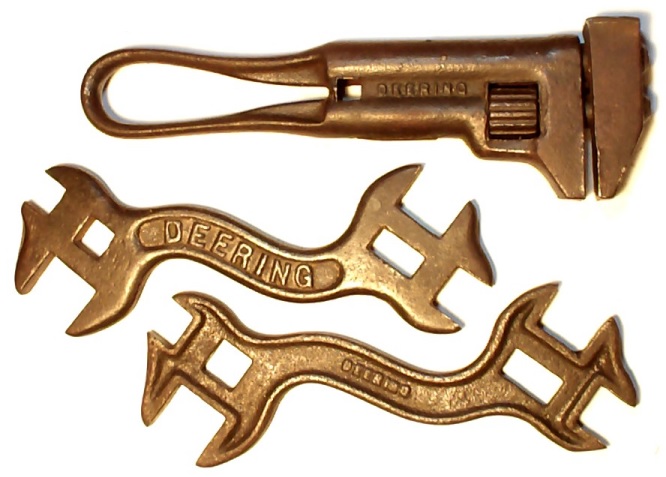